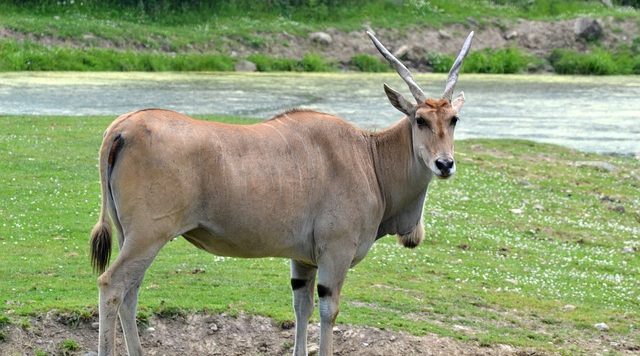 The common eland (Taurotragus oryx), also known as the southern eland or eland antelope, is a savannah and plains antelope found in East and Southern Africa  The Common Eland is a species of the family Bovidae and genus Taurotragus. It was first described by Peter Simon Pallas in 1766.

An adult male is around 1.6 meters  tall at the shoulder while females are shorter by about 20cm. The male Eland weighs up to 942 kg with an average of 500–600 kg and 350 kg with an average of 340–445 kg for females). The eland is the second largest antelope in the world, being slightly smaller than the giant eland.

The Eland is mainly a herbivore with its diet primarily being grasses and plant shoots/leaves. They form herds of up to 500 animals, but are not territorial. The common eland prefers habitats with a wide variety of flowering plants such as Savannah, woodlands, and open and Montane grasslands; avoids dense forests. It uses loud barks, visual and postural movements and the flehmen response to communicate and warn others of danger. The common eland can be domesticated and can used by humans for leather, rich and nutritious milk and meat ( https://www.researchgate.net/publication/255968672_Comparison_of_meat_quality_between_eland_Taurotragus_oryx_and_cattle_Bos_taurus_raised_under_similar_conditions ).

In Uganda, the eland is mainly found in Lake Mburo National Park ( http://raksafaris.com/2-days-uganda-sa…encounter-safari/ ) though it also exists in Kidepo Valley National Park and Piane Upe Wildlife Reserve. This great Antelope species should be among the special ‘look-outs-for’ in one’s Wildlife Adventure Safari in Uganda.