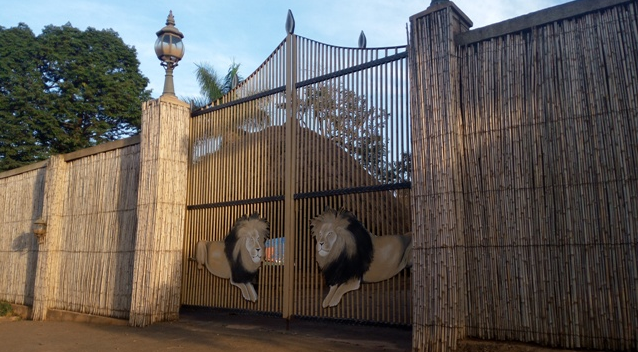 The Kasubi Tombs cultural site is situated on the Kasubi hill, 5km from Kampala city, along the Kampala-Hoima road. If you are coming from Kampala city center, pass by Makerere University and drive down to Nakulabye trade-center. Check for the Nakulabye roundabout, cruise right onto Hoima Road, it’s a short drive of 1 kilometer and turn left to the Kasubi Hill. The site homes burial grounds of four  fallen Kabakas (kings of Buganda) and some other members of the Baganda royal family. Hitherto, the site remains a significant political and spiritual ground for the Baganda, as well as a standing example of traditional architecture. It turned out to be a UNESCO World Heritage Site in December 2001, when it was reported to be; “one of the most remarkable buildings using purely vegetal materials in the entire region of sub-Saharan Africa”. Some of the major buildings at the site were almost totally destroyed by a fire in March 2010. The cause of which is still under investigation. Consequently, in July 2010 it was included in the list of the World Heritage Sites in danger.

The Buganda Kingdom in conjunction with the National government of Uganda have partnered in rebuilding and restoration of the famous site. Reconstruction started out in 2014, sponsored by the government of Japan. The celebrated World Heritage Site encompasses around 26 hectares / 64 acres for that matter, on the Kasubi Hill, in the Kampala city. Nearly the entire site is open agricultural land that is cultivated using traditional techniques. One cavity (corner) accommodates a royal palace assembled in 1882 by Muteesa I, the 35th Kabaka of Buganda, to substitute a palace built by his father, Suuna II in 1820. The advanced palace came to be a royal burial ground on his death in 1884. The popular site is one of 31 royal tombs across the Buganda kingdom since it’s foundation in the 13th century. Customary, the body of the fallen king was laid to rest in someplace, with another shrine for the fallen king’s jawbone, so-believed to contain his soul. Uncustomary, breaking from tradition, the famous site in Kampala seats the royal tombs of Buganda kabakas:  Muteesa I (1835–1884), Mwanga II (1867–1903), (died in exile on the Seychelles Islands, and remains returned in 1910), Daudi Chwa II (1896–1939), Sir Edward Muteesa II (1924–1969),  (died in exile in London, and remains returned in 1971). However, descendants of these four fallen Kabakas are also laid to rest elsewhere on the esteemed site.